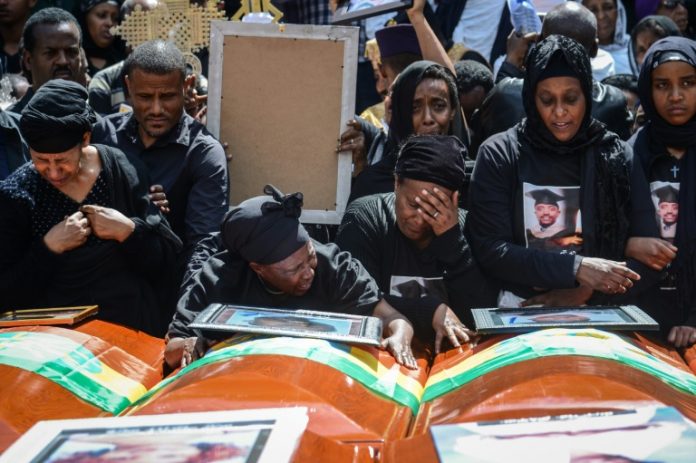 Ethiopians were holding funerals Sunday for friends and relatives who perished in last week’s Ethiopian Airlines crash, which killed all onboard and saw the worldwide grounding of the Boeing aircraft involved.

Families in 35 nations were left bereaved when the Boeing 737 MAX 8 aircraft plummeted from the sky just minutes into its flight to Nairobi last Sunday, killing all 157 passengers and crew on board.

One week after the crash, relatives of the 17 Ethiopian victims gathered with hundreds of others at Holy Trinity Cathedral in Addis Ababa, sobbing and holding portraits of their loved ones as an Ethiopian Orthodox priest said the last rites.

“What I can’t forget is that she left an eight-month-old child and didn’t come back,” said Meselech Petros, whose sister Amma Tesfamariam was a flight attendant on the doomed aircraft.

Her 28-year-old sister wasn’t supposed to work that day, but had gone in to cover for a colleague.

Caskets draped in the Ethiopian flag were brought to the cathedral in a convoy of black hearses accompanied by hundreds of mourners.

But it was not clear what the coffins contained.

Witnesses said the plane nose-dived into a field southeast of the capital, with the force of the impact leaving few bodies intact.

Hundreds gathered for the funerals at Holy Trinity Cathedral in Addis Ababa, weeping and holding up pictures of those who died

On Thursday, as grieving families and friends visited the area where the plane went down, our correspondent saw them being handed plastic water bottles filled with earth from the site.

Ethiopia’s government has said it may take up to six months to identify the remains.

– ‘Grief belongs to everyone’ –

“What makes us very sad is we didn’t find any of her remains,” said Teshome Legesse, whose 24-year-old niece Ayantu Girma was a flight attendant on the plane.

Ethiopians Airlines is Africa’s largest carrier and in many ways the international face of the nation.

For those in mourning, it was even harder not to have any physical remains to bury, with the government saying it could take six months to identify the victims

The deaths have shocked Africa’s second-most populous country, and the funeral attracted a wide range of mourners.

“We all are children of Adam and Eve, even though our skin colours are different,” said Seyoum Kidanu, a retired police officer wearing full dress uniform and a sash in the colours of the Ethiopian flag.

“When one person dies in this world, the grief belongs to everybody.”

The black boxes from the plane are currently being examined by France’s BEA air safety agency, which is working with American and Ethiopian investigators to determine what brought it down.

Although Ethiopia has warned the investigation would take “considerable time,” there were swift moves in the wake of the crash to ensure the worldwide grounding of the Boeing 737 MAX 8.

The move came after similarities were identified with the October crash of an Indonesian Lion Air jet that killed all 189 passengers and crew.

As the world awaited answers, there were few answers for those trying to cope with the loss of a loved one.

“She’s a very good person. I don’t how to describe her,” said 26-year-old Selamsew Mathias, brother of the flight attendant Amma.

“We are broken and hurting very much. It’s very difficult.” 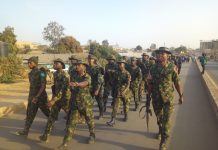 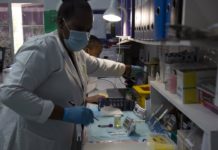 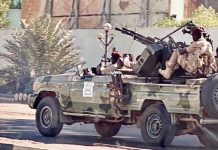 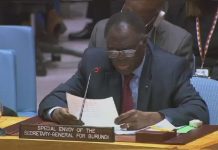