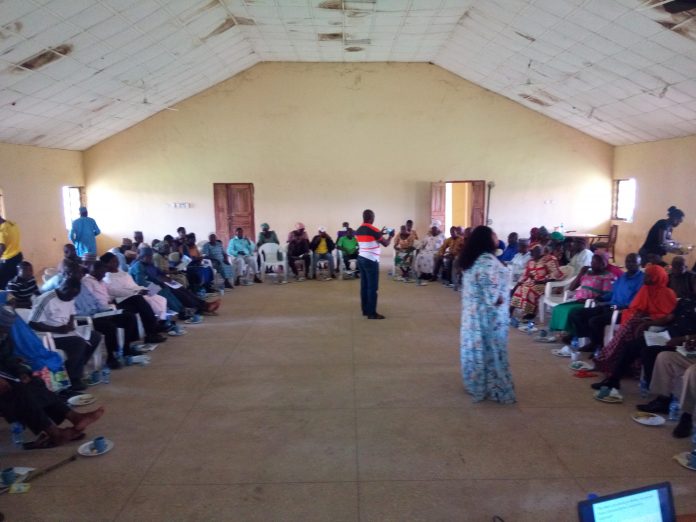 An enclave called Mahanga in Rankum community of Riyom Local Government Area of Plateau state in northcentral Nigeria is now open to accept back the natives and other inhabitants who fled the community as a result of the incessant crisis that engulfed the state in 2001 and by extension, the farmers/herders conflict.

Rankum as it was originally called before being taken over by the Fulanis and renamed Mahanga, was for the past 18 years ‘a no go area’ for the indigenes of the state for the obvious reason of being killed by the new occupants.

The same tale will also be told by the Fulanis who will not also venture into the Jol community in the same Riyom LGA for fear of being attacked and killed.

However on Saturday in Riyom, the two opposing parties came together after a painstaking effort by a Non-governmental Organisation (NGO), known as Search for Common Ground (SFCG), with sustainable push for peace ensured that Mahanga and Jol inhabitants dropped their hostilities and came together to proffer a solution to their coexistence.

Speaking at an Inter Dialogue section organized by Search For Common Ground for both communities, the Project Coordinator, SFCG, Patience Chaimang, said since the long conflict started for over 18 years, this is the first time the two groups are coming together to forge a way forward.

“Today is record breaking for us at SFCG, we have worked tirelessly to see that these two groups come together to say no to blood shedding.

“Before now we have met with them separately at a forum tagged intra-dialogue and today we are bringing them together.

“Their coming together is a starting point for peace. We believe that peace is a process and taking this first step is very crucial as we intend to sustain it for a maximum and effective result”, Chaimang said.

On her part, the National Peace Adviser, SFCG Ms. Ema Billings, said for the fact that the two groups are sitting down together to dialogue, suggests that they are ready to change the trend of violence in Riyom.

Billings said many organisations have tried to bring the warring group together but both communities did not quite trust them.

“They responded to us because according to them, we are the first people to ask them what their grievances were and we also went into their communities to find out ourselves.

“I can tell that there is hope to an end to the wanton killings that have engulfed this locality”, Billings said.

Responding, the Imam of Mahanga, Malam Suleiman Ibrahim, said it is time to lay down sword and embrace each other.

Ibrahim said the issues that triggers violence as identified are blocking of cattle routes by farmers, beating of shepherds in the bush by farmers which results to injuries and sometimes death, hate speech amongst others.

However, the Chairman of Riyom Local Government Area, Hon. Emmanuel, Danboyi Jugul, urged the two communities to stop pretending over the issue of peace for the development of the council area.

“I want the Fulanis and the natives to stop pretending and pursue genuine peace; we don’t want a situation where we will all agree to embrace peace and after the meeting, killing will resume. We should be sincere to ourselves and pursue what will guarantee a peaceful environment”.

Our correspondent reports that the two groups will be coming up with a communique aimed at addressing the issues raised as conflict triggers.