An Algerian court on Tuesday sentenced journalist Khaled Drareni to two years in prison on appeal, reducing his original sentence, in a trial that rights group have denounced as violating press freedom.

He was convicted of “inciting an unarmed gathering” and “endangering national unity” linked to coverage of the protest movement. His sentence was not suspended, meaning he must stay in prison to serve it.

In an initial Aug. 10 court decision, Drareni had been sentenced to a three-year term. Before that, he had been in pre-trial detention for more than five months.

One of Drareni’s lawyers, Abdelghani Badi, told reporters that Tuesday’s sentence is “excessive and reflects the authorities’ will to rein in the Algerian press.”

Reporters without Borders denounced the decision, saying it “contributes to the deterioration of the image of Algeria.”

The NGO called for a gathering in front of Paris city hall where a banner is to be deployed in support of Drareni later on Tuesday.

Drareni’s national and international support committees called last week for his immediate immediate release on health grounds, arguing he appeared weak during his appeal hearing before a court in Algiers.

Mass demonstrations brought down Algeria’s long-time president and his entourage in April 2019. While a new president was elected in December, the pro-democracy movement is seeking deeper change in a nation whose rulers have been shadowed by the army since it gained independence from France in 1962.

In their case against Drareni, prosecutors noted a Facebook post in which Drareni said the Algerian political system hadn’t changed since the election in December of Abdelmadjid Tebboune as president, and that Drareni shared a call by multiple political parties for a general strike. 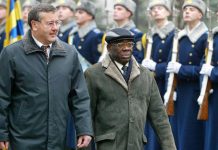