A Chairperson of South Africa’s Northern Cape Province opted to buy ambulances in place of official cars for himself and other top officials of the province.

In a post on his Twitter handle, Zamani Saul, who serves on the appointment of the ruling African National Congress, ANC, had in his inaugural address pledged to serve the best interest of the people.

His action has elicited lots of praise on South Africa’s social media space with many people calling on other leaders to learn from him.

“Today 27 new ambulances released. This is a first batch of the 63 ambulances. We are still resolute no new cars for Premier and MECs, let’s buy more ambulances.

“This afternoon I had a meeting with youth in Galeshewe. Youth unemployment is a ticking time bomb, we need to attend to it,” he added in a tweet accompanied by photos of the ambulance presentation and his meeting with the youth.

Journalists quoted him as saying during his inauguration that the interest of the people was always going to be his priority and that of his administration.

“… cars for MECs will be purchased on basis of absolute necessity and by the approval of the Premier. All unused monies budgeted for new cars for MECs must be directed to the Department of Health to augment the budget to purchase ambulances

“… we can’t, as elected leaders continue to indulge in luxury sedans and SUVs whilst our sickly people are struggling to access ambulances.

“We are not here for blue lights and self-indulgence. All MECs to be appointed to this 6th Administration must understand that the opportunity to serve our people is an absolute honour, and not a stepladder to riches and fame. We are not royalty here, but ordinary and simple social and political activists.” 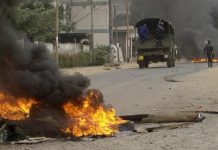 Coronavirus: Nigeria’s testing up by 32% after Jack Ma’s donation